Up from his hole climbs our mouse ( https://wp.me/p7Ohdq-nw ), and this where he finds himself, on the edge of the world.  The coast here is very rugged, being exposed to the full force of the Atlantic ocean, the waves take their tole on the cliffs. The geology here is sandstone and shale laid down in layers in an ancient lake and then pushed up millennia ago when land masses collided, so the sea wears away at the cliffs leaving strange formations exposed. 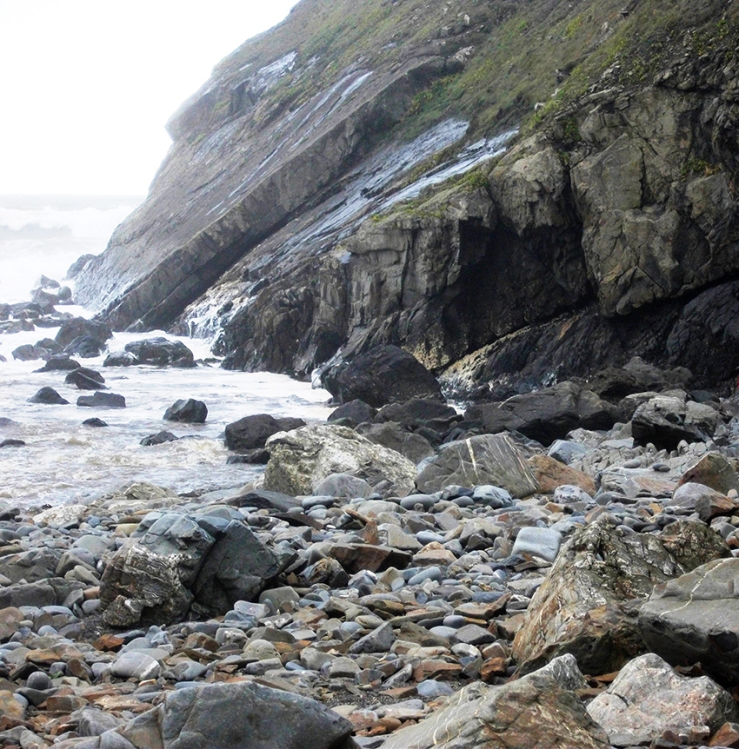 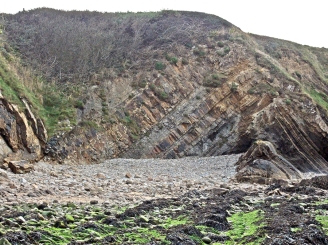 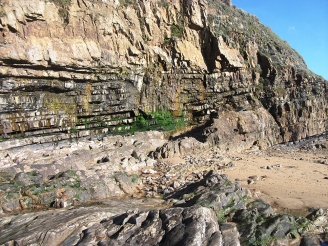 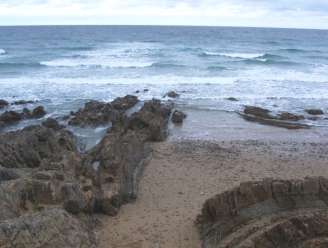 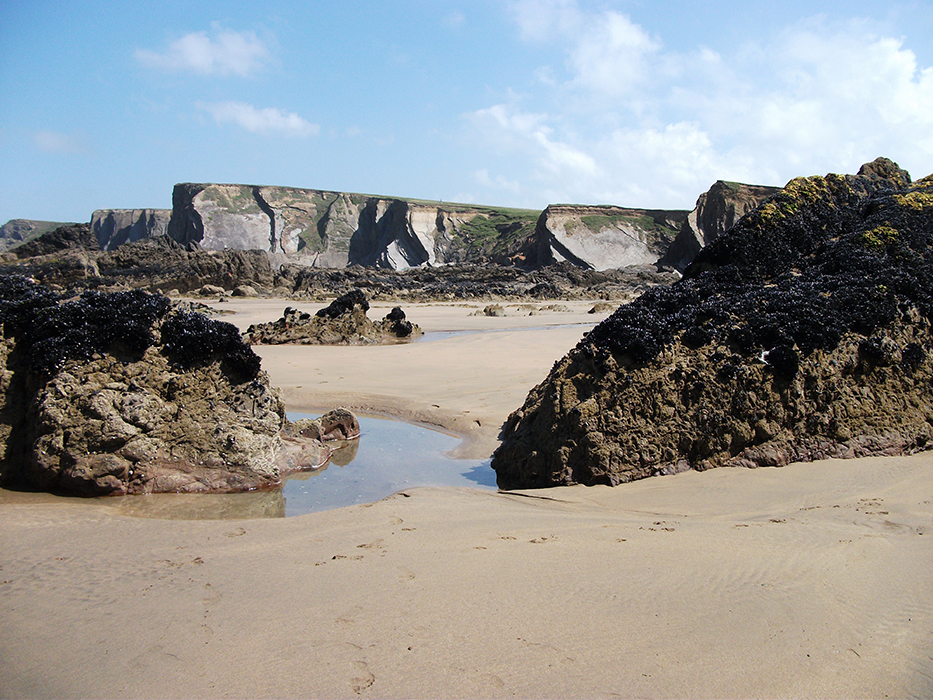 For this illustration I wanted to show not only the layers in the rocks but also the layers of life and activity so I have sea level, cliff top where our mouse adventure is happening and the sky above were the swallows swoop around above it all. To start, as usual, I have sketched out in watercolour pencil on Bockingford watercolour paper. 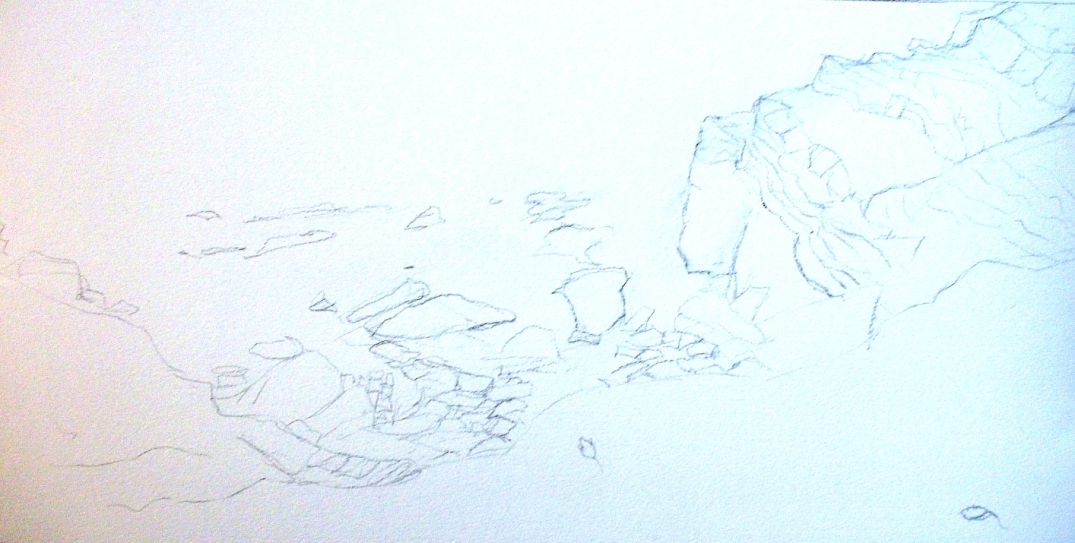 For the surf I have used a wax candle as a resist, It is not a particularly precise way of doing it but it gives a much softer edge than using masking fluid and on the watercolour paper produces beautiful textural effects. 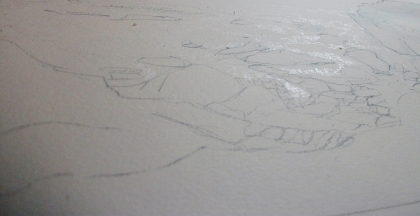 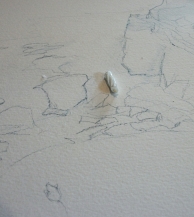 I find getting the colour of the sea very difficult and it changes every time but eventually I settled for Coeruleum blue with a touch if Alizarin crimson to bring down the greenish hue and a lot of water so that I can build up the colour in layers giving the sea varied depth and softer edges. 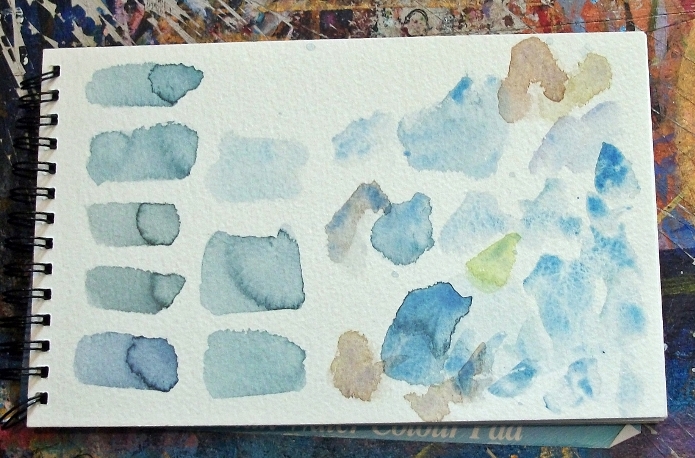 Building up layers of paint and leaving it to dry in between, then adding more wax resist where needed and making the inside of the waves slightly darker. 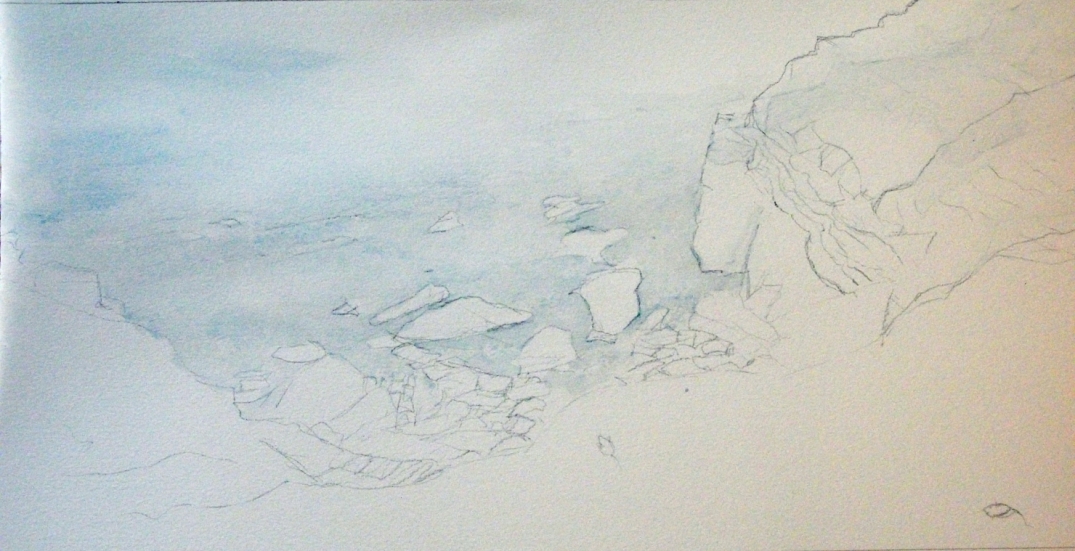 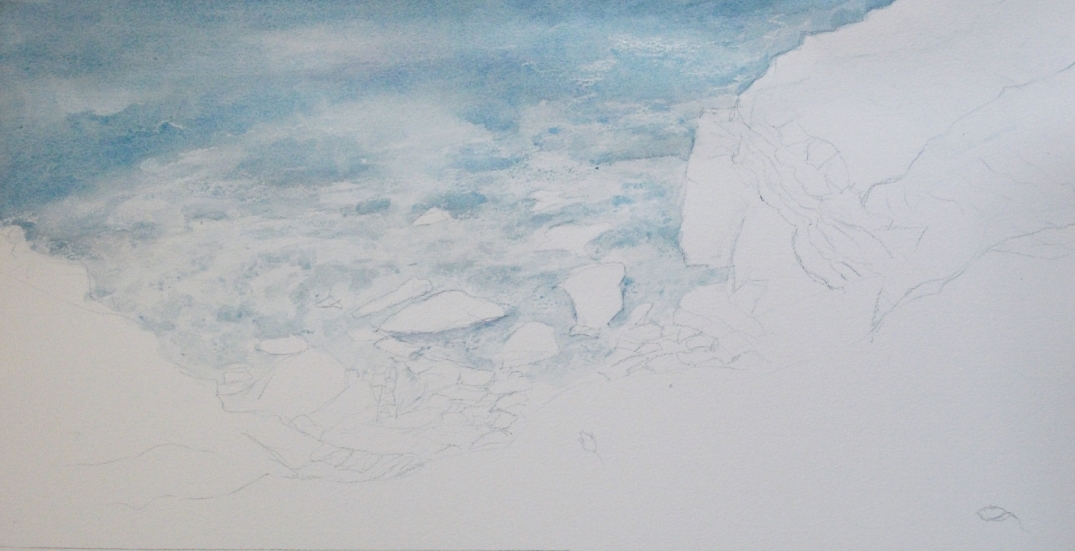 The rocks and cliff were painted with various shades of grey, brown and green made using Ultramarine, Alizarin crimson and both Lemon yellow and Gamboge hue. 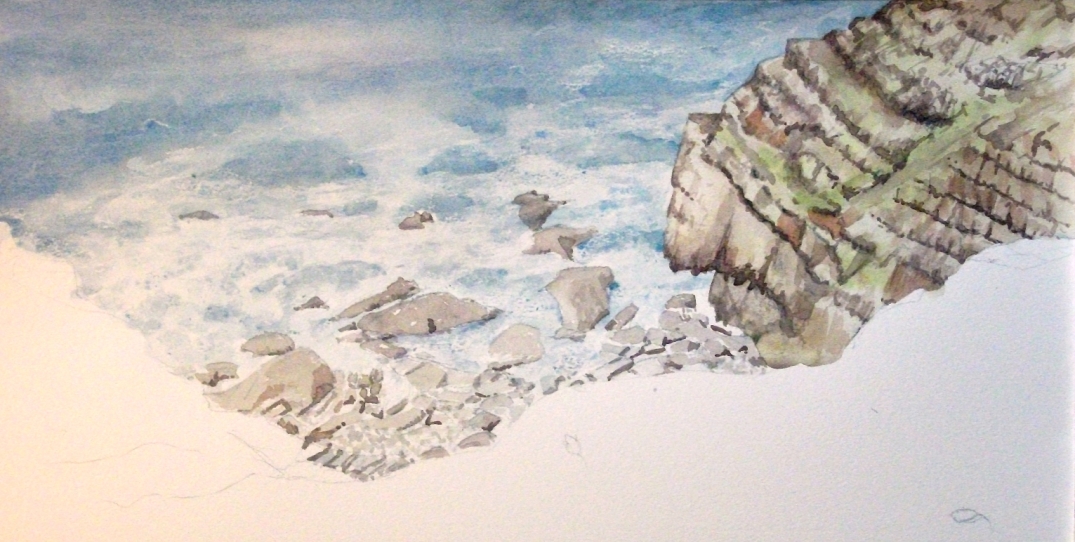 I filled the grassy North facing cliff with a green made from Ultramarine and Lemon yellow, dropping darker tones in before it dried for the shadows amongst the tufts. When it was dry I put in a few marks with the wax and then repeated the layer of paint.  I added the flower heads in Gamboge hue and when they were dry I used the wax on top so that further layers would not dim the yellow. 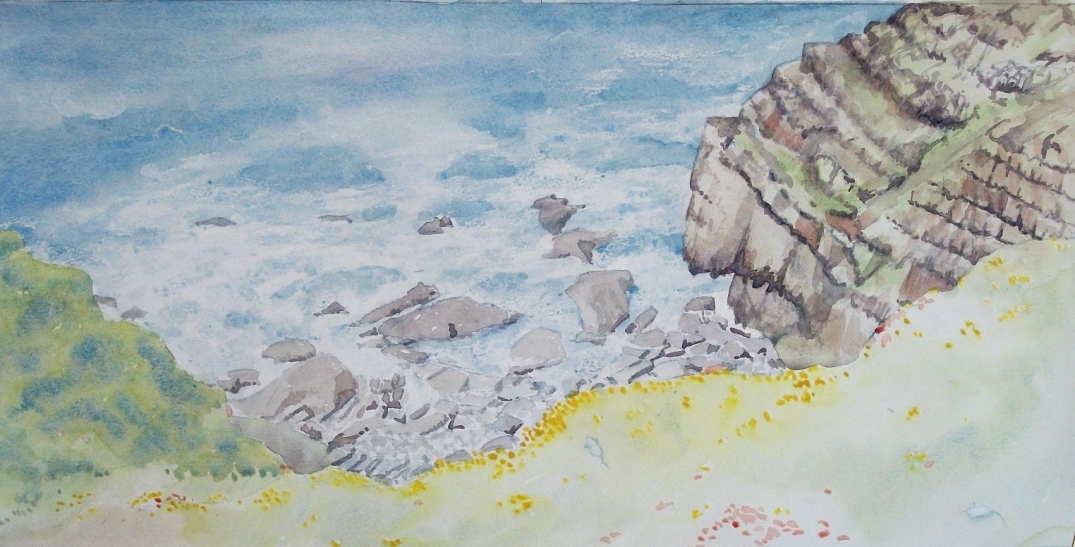 I repeated the process for the foreground but using Gamboge hue in the green mix instead of the Lemon yellow, again allowing it to dry, adding marks and repainting. 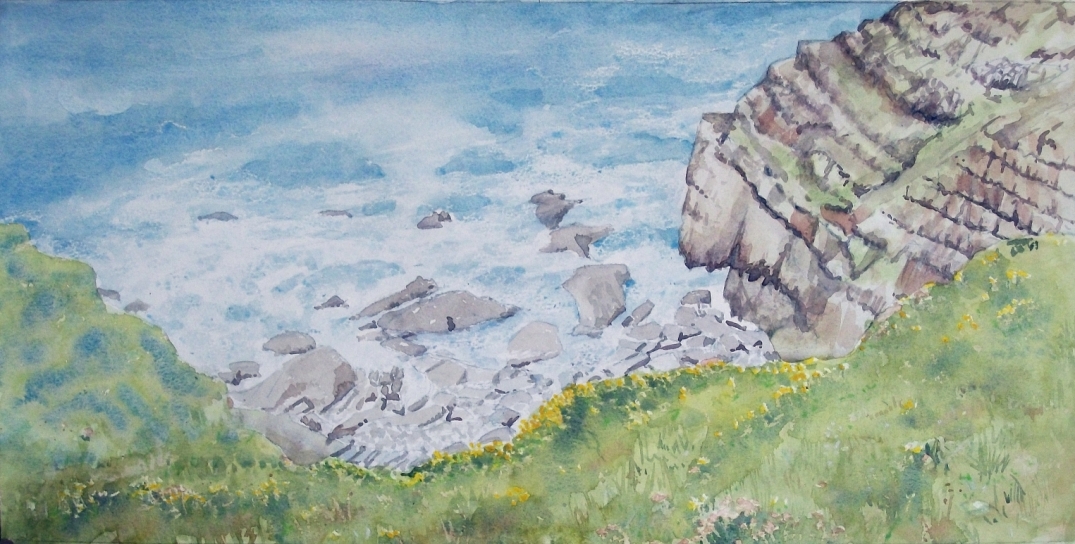 Next I added more detail to the rocks, our mouse and another mouse with slightly browner fur. 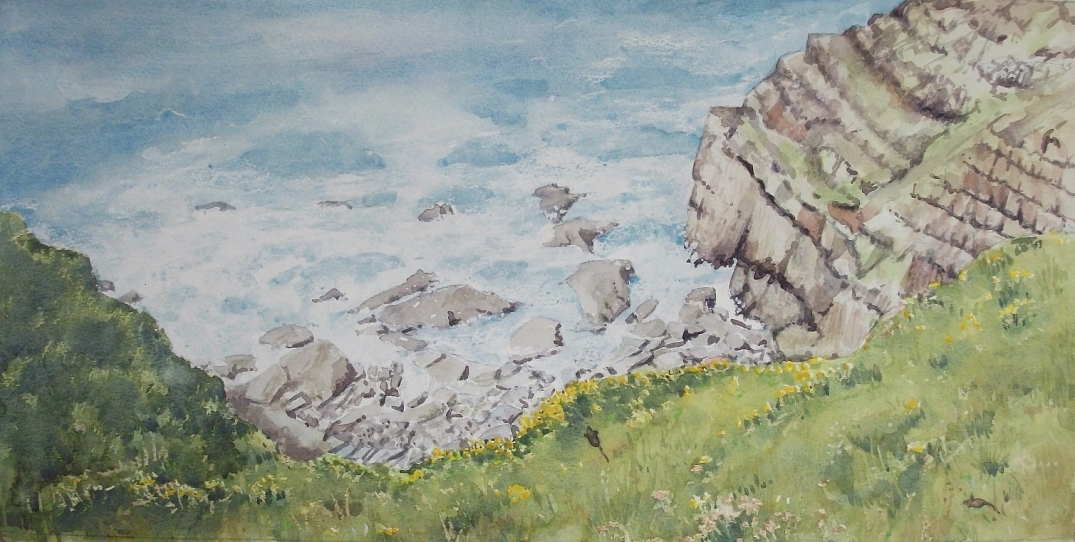 And finally the swallows and a little more sea foam with white paint.

Will our mouse be any closer to getting home and what is that other mouse doing?